The Altair Copper Prospect is interpreted to be Volcanic-Hosted Massive Sulphide (VHMS) style copper mineralisation associated with black shales and intermediate volcanics (Figure 1). The Company interprets the geological setting of the mineralisation at Altair to be that of a VHMS / SEDEX environment.  Evidence for this interpretation includes: 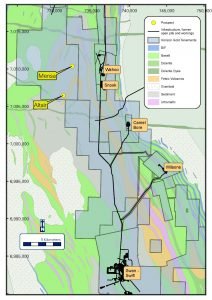 Limited drilling in the 1990’s by Goldfields Exploration intersected broad zones of copper mineralisation at Altair, including the following assay results:

The Altair primary zinc-copper mineralisation forms a broad continuous lens of polymetallic (zinc-copper-silver+/-gold) mineralisation with a strike of more than 450 metres, down dip extent of 350m and average thickness of 25m (Figures 2 to 7). The average density (SG) of all assay intercepts within the lens was estimated at 3.1 tonnes per cubic metre[1]. Mineralisation remains open down plunge to the east and at shallow depths along strike to the north.

The Altair mineralisation is located at the base of a black shale sequence and occurs as fine to very fine grained red/brown sphalerite associated with semi-massive magnetic pyrrhotite in folded sub-millimetre stratiform layers interpreted to reflect original bedding plane deposition.

It is important to note that base-metal geochemistry at Altair (and potentially more regionally) is strongly depleted to around 50m depth.  As can be seen in Figures 3 to 5, the supergene copper mineralisation occurs below 50m depth, and was not intersected in the initial vertical RAB and air-core holes drilled in the early 1990’s.  This suggests that the historical wide-spaced and shallow drilling conducted in the Gum Creek Greenstone Belt may not have been an effective test for this style of mineralisation.

Resource Potentials Pty Ltd completed a full geochemical and geophysical review of the Altair / Mensa area. Surface geochemistry samples were gridded and imaged, including ternary images to compare concentrations of Au, Pb, Zn and Cu. Multiple geochemical anomalies were identified, including over the Altair, Central and Mensa prospect areas, however multi-element anomalies including elevated gold are the priority targets for Altair style mineralisation.

High frequency helicopter-borne TEM data was also reviewed by Resource Potentials to identify electrical conductors over the Altair-Mensa area. Ground based MLEM data collected using a lower transmitter frequency was then used to determine the strongest electrical conductors, and 3D conductor plate modelling of the MLEM data was then completed using lithological and structural measurements from detailed field mapping and the TEM decay data to help constrain the interpreted conductor plate orientations (Figure 7).

Two RC pre-collared diamond holes at Altair have been designed to test the strong gravity and conductivity highs at depth beneath and down plunge of the currently defined Zn-Cu-Ag mineralisation (Figure 7). Both RC pre-collars have been completed with diamond drilling to commence mid-June 2022. 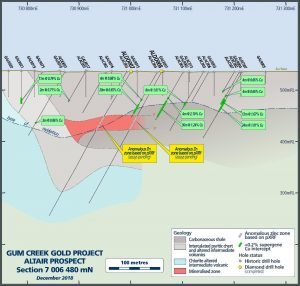 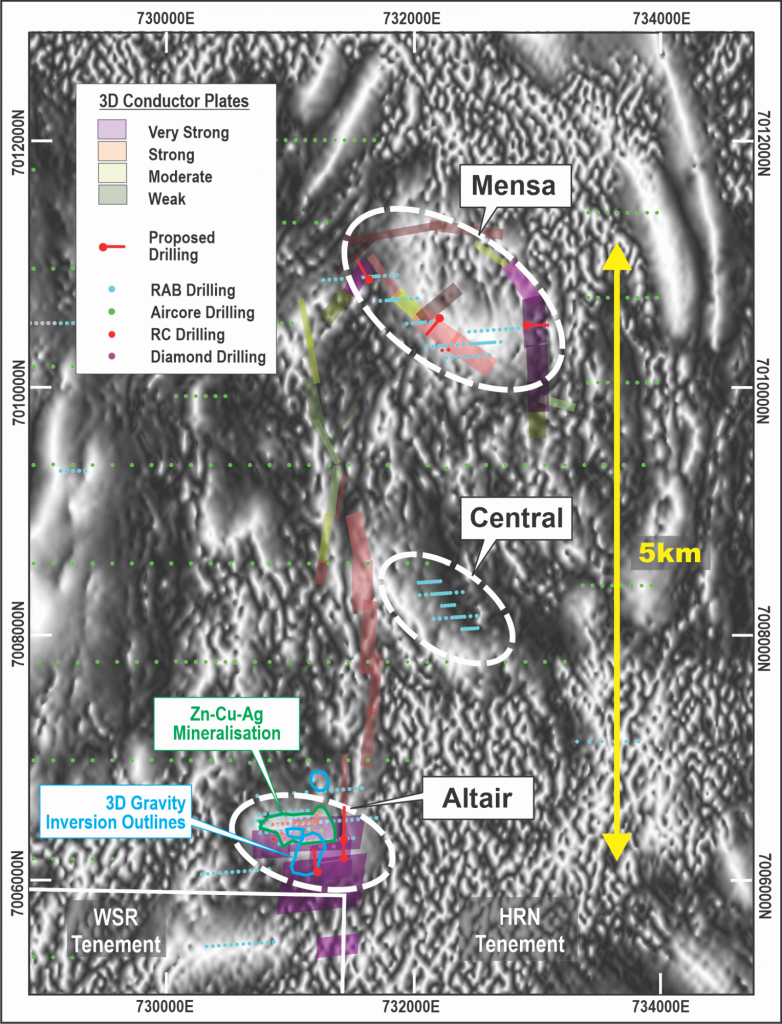 Regional mapping and geophysical interpretation at Gum Creek suggests the target stratigraphy hosting the Altair prospect may extend at least 5km to the north to the Mensa Prospect (Figures 1 & 7).

RC drilling to intersect the strongest electromagnetic conductor plates that coincide with elevated magnetics and anomalous geochemistry has been completed at Mensa (Figure 7). Results are awaited.