The Howards deposit is located in the southern portion of the Gum Creek Greenstone Belt, 28km southeast of the historic Gidgee mill. The current MRE for the Howards deposit is 6.0Mt @ 1.1g/t Au for 204,000 (refer to Horizon Gold Ltd ASX announcement dated 12 July 2019).

Gold mineralisation at Howards is hosted within a broad, north-south trending, vertical to steep west-dipping shear zone, approximately 150m from, and sub-parallel to the east-dipping eastern contact of the Montague granodiorite. Mineralisation is associated with strong quartz veining and intense silica-albite-biotite alteration within a sheared basalt above a footwall dolerite unit. Two sinistral northwest-trending faults offset the northern (northern lode) and southern (southern lode) extensions of the main Howards lode by 30m and 150m respectively (Figure 2).

RC drilling since the deposit was discovered in 1994 has confirmed the presence of broad zones of potentially open pit gold mineralisation that has now been defined over a continuous strike of +1.3km, with mineralisation remaining open to the north, south and at depth within the northern, southern and central lodes. Significant historic intercepts (>60 Au gram x metres) from the deposit include (Figure 1): 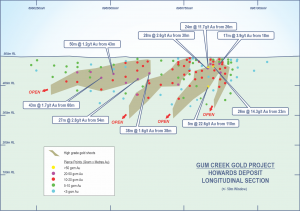 Drilling by Horizon Gold during 2021 (Figures 2 & 4) returned numerous >40 gram x metre gold intercepts from the central lode of the Howards Prospect including:

Exploration drilling will continue to target strike and depth extensions to existing mineralisation with the aim of increasing the current MRE. 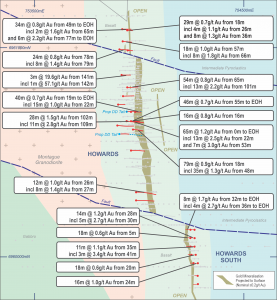 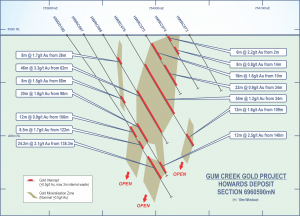 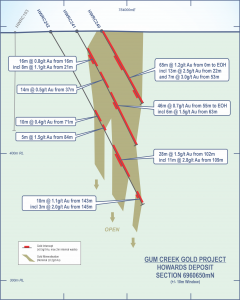